Most of you would surely say in order to attract customers, one should have good products, good customer service, good marketing and so on. These are indeed true but have you ever thought that you can attract customers using “PSYCHOLOGY”?

While there are countless Marketing psychologies, but the goal is always the same – convince, satisfy and gain trust of the customer because if you won’t, someone else will.

That’s where psychological tactics comes in the scene!!!!!!!

Good news! You don’t have to be a psychologist to stage a successful emotional appeal to your potential customers. Many successful marketers use these strategies to great effect. With a bit of research and experimentation – you can too.

I have gathered my favourite psychological experiments that can help sales and marketing professional to a great extent.

Alex Lasky Of Opower wanted to encourage people to save more energy and he thought that with just a shift in attitude toward our energy use, we can all save a lot.

He ran a psychology experiment in which people received the same message in three different tones about why they should save energy.

But all of the above narratives failed to make any significant impact. And that’s when they introduced the fourth tone.

And that one worked like a magic, leading to a 2 percent reduction in the household energy.

Use the experience of others in the form of peer reviews, ratings, ranking, etc and build a social proof of your product/ services and in turn exerts pressure to comply with the new normal/ fall in line to what rest are following. This makes your potential clients feel that they are missing out, when compared to the competition.

2. As they say “Eyes Are The Windows to Soul”

Study Conducted by: Dr. Alburt Bandura between 1961-1963 at Stanford University. The experiment is called a “Bobo doll experiment”.It was to prove that human behaviour is largely based upon social imitation

He separated participants into three groups: one group saw a video of an adult showing aggressive behaviour towards a Bobo doll;  another one saw a video of a passive adult playing with the Bobo doll, and the third formed a control group. Children watched their assigned video and then were sent to a room with the same doll they had seen in the video (with the exception of those in the control group). What the researcher found was that children exposed to the aggressive model were more likely to exhibit aggressive behaviour towards the doll themselves, while the other groups showed little imitative aggressive behaviour.

It shows that the ” VISUALS ” have an enormous impact on our moods and emotions – possessing the profound ability to influence our perceptions. We live in a visual world. Our brain can process videos/images a whole lot faster than written words.

Take Away For Marketer

Human behaviour depends a lot on what we see. Through the awesome power of internet and social media, videos allow us to share ideas, spread information, and promote the business. Run some Ad campaigns to reinforce your message and brand. 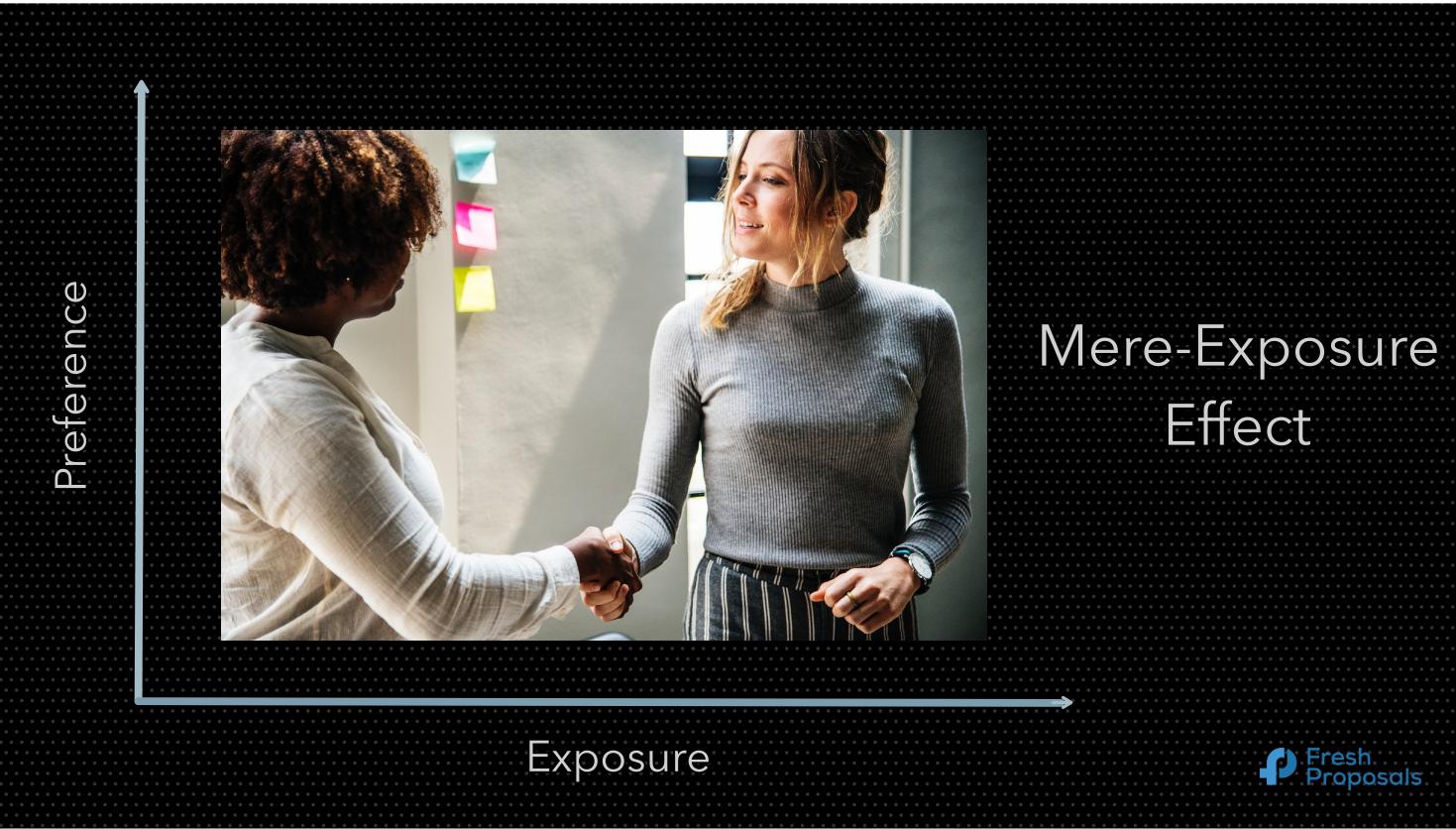 Familiarity principle also known as mere-exposure effect means that people prefer things that they are most familiar with.

According to this theory, humans tend to develop a preference for or favourable opinion of things simply because they are familiar.

The more often humans are exposed to certain thing, the more favourable we perceive that thing to be.

This is why the songs we hear on the radio tend to seem to get catchier over time.

In that he showed each character for 1 to 25 times, and asked the study participants to guess the meaning of the characters.

The more often a study participant saw a particular character, the more they came out with a positive meaning to it.

Capture leads early so that you can get plenty of time to expose them to our brand.

That’s why cross-selling opportunities should be preferred over many other sales techniques – because customers know you already and have certain relatable reference in their mind.

You can also incorporate email marketing strategy to build a relationship with them. Email marketing is still an effective way to turn a visitor into a paying customer.

If interested don’t forget to have a look at our blog Common email marketing mistakes. How to do it right?

4. Slow and Steady Wins the Race

Study Conducted by: Walter Mischel in 1972 at Stanford University to study if the deferred satisfaction can be an indicator of future success.

When it comes to marketing, slow and steady is the key to success. I see hundreds of emails, blog posts, and ads with the promise of helping to go from 1 to 1,000,000 followers virtually overnight and I am sure you also would have came across it. And it’s so tempting to click on those links because who doesn’t want the success with all the promises? But the path to a destination is never smooth.

If you rush ahead without pausing then your imagination will never get a chance.

5. Because Answers Exists Only to Questions

When question being asked we give answers based on not just considering the question but we also think about others, like how the answer will appeal to them. This theory is called as “Acquiesce effect”.

The psychology website Changing Minds explains when asked a question we will tend to answer more in a positive way rather than the negative way. Most people tend to agree with one-sided statement.

Take your own time for planning and deciding the leading questions you may be asking in customer development calls, surveys, or questionnaires. You can easily manipulate the answers depending on the questions technique. This concept has very important implications for the questions used in police interviews of eyewitnesses.

Psychological principles like these are used so often in marketing that we often don’t even notice them. But these principles are incredibly powerful ways to influence behaviour and drive the decisions that you want people to make, even at a subconscious level.

Psychology is a major game to be played in the playground of the mind.

Your go-to event proposal checklist Here is a quick way to see if you're in with a chance of winning the event planning deal. Examine the current draft of...

END_OF_DOCUMENT_TOKEN_TO_BE_REPLACED

The Ultimate Checklist for Marketing Proposal Here is a quick way to see if you're in with a chance of winning the deal. Examine the current draft of your...

END_OF_DOCUMENT_TOKEN_TO_BE_REPLACED

Here is a quick way to see if you're in with a chance of winning the deal. Examine the current draft of your graphic design proposal with this 9-Step graphic...