This is the first part of a multi-part series about how the startup/product idea was conceived and the turns of events I had to go through. There have been moments of failure, painful realization of the inability to change things around us with existing resources and mindset, overcoming failures, keeping up faith-patience and a lot more. I hope you will enjoy this ardent journey of an entrepreneur.

It was Thursday evening and I was about to conclude an online product demo followed by Q&A discussion with my prospect. It was the third personalized walk-through session after a couple of discovery calls. George H, one of the directors who was leading the prospect’s team asked me to send a formal proposal.

The demo went really well and Q&A interactions have been quite satisfactory. I was excited and confident about closing that deal. The sequence of sales calls and interactions were such that I was sure of onboarding the prospect as a paying customer. I almost imagined that the client was simply going to wait for me to send the proposal. As soon as the proposal is sent, we are all set to sign it and the client is going to raise a purchase order.

Reasons to Get Excited About It

During the demo, I noticed a few things (call it insights or strong sales signals:

“It is going to be a pretty large deal of the year for us”, I said to myself.

I briefed my colleague about my discussion with the prospect. In equal excitement he asked me, “When are you going to send the proposal?”

I said, “I will be sending it by tomorrow, since I need to include certain information.”

Selling For The First Time? Nah!

If you are wondering if it was my first time to write the proposal, No, it wasn’t.

I am a co-founder of a company that offers an online/ SaaS software for global SMBs. Unlike the rest of our competitors, we are not venture funded, we are bootstrapped right from the start, but profitable one. Hence we have been running the show with limited hands.

So, I had closed a good number of small to medium ticket sized deals in the past (of course, I am using small-medium terms relatively. It is a matter of scale depending on industry, product, funding, country, etc). I had sent a lot of proposals previously and had a moderate success.

How Can I Make It Better?

I wanted to send out an impressive proposal. I knew, any content gets consumed to greater extent depending on its 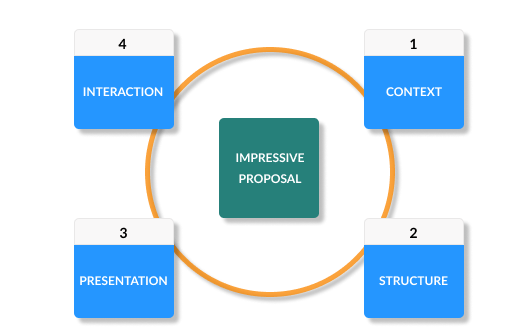 I have always tried to prepare the content keeping the end user in mind. Similarly, in case of a sales proposal, I would have a well defined structure: breaking the overall proposal into sections, headings, sub-headings, etc in a logical order. For a new prospect, I have been refining specific parts of proposals depending on clients. I started looking for a few excellent examples for inspiration.

I knew the prospect’s pain areas pretty well. I knew most important decision makers and what they were expecting. I have included these topics at the beginning of the proposal and this time, gave it a flip to their pain points with our solution – how it will prove effective,

Usually I would try to beautify the proposal (not too fancy or flashy, but using available tools, techniques : simple things like changing fonts, adding margins, having decently colorful tables, include few images, etc).

I must admit that I don’t have artistic perspective/creative abilities nor required resources to beautify a Microsoft Word file. Hence resulting proposals would still look average 🙂

I have been sending such Word-to-PDF-converted proposal files. PDF files are bulky. This time I wanted to up my ante and send a professional looking proposal, which would amplify the prospect’s confidence in our product and company.

After all, I have a solid confidence in our product and our abilities to deliver the best possible service. I didn’t want to leave things to luck or take chances considering fierce competition. I definitely wanted to impress the prospect and hear him say YES! Hence I started looking for ways to create great looking proposals.

Proposal Blues – It All Started with Microsoft Word?

I have gone through the pains of writing proposals using MS Word,

There were a couple of instances wherein only after sending proposals, I realized the prospect name/email/company were incorrect. And it was because I copy-pasted an old proposal file and just forgot to remove/replace the name of the prospect or there was a typo in the prospect’s name/company name or email id and Ctrl+H, ‘Replace All’ couldn’t remove erroneous entry.

It is lame, I know. So I set a process to closely review proposals before sending those to prospects. Still, such things fall through cracks.

Don’t get me wrong. MS Word is a great tool, so is MS Excel. The only problem with such tools is:

Few Other Things I Tried

There are market-place websites which provide designed templates and you can download those. I purchased a few of those templates. God, I couldn’t change a thing in most of these templates because I didn’t have Adobe Design software nor I was skilled to use such tools. Put simply, I wanted to focus on sales through nice looking proposals but not investing too much time in learning design.

I tried my hand with Google Docs and realized it is another online Microsoft Word that has hundreds of folders with thousands of files and lacking many things including managing pricing tables, design capabilities. To its credit, Google Doc scores high in terms of collaboration and versioning. But Google Doc is not something you share with your prospect and expect him/her to sign off.

Then I looked at a few proposal tools as well, such as Bidsketch, PandaDoc, MS Word based addons and few other tools, but I wasn’t really impressed with the way proposals turned out or the proposal interactions I wanted to enable for our clients. Yet, I liked some of the features-benefits these tools offered such as –  content library, online signature.

Then, what did I decide? Let’s find out in next part.

END_OF_DOCUMENT_TOKEN_TO_BE_REPLACED

This is the third part of a multi-part series about the turns of events I had to go through and how the startup/product idea of Fresh Proposals software was...

END_OF_DOCUMENT_TOKEN_TO_BE_REPLACED

This is the second part of a multi-part series about how the startup/product idea was conceived and the turns of events I had to go through. There have been...